In the late 1800's and early 1900's, hatred and bigotry against Native Americans was common. In fact, during an 1886 speech given in New York, President Theodore Roosevelt said, “I don’t go so far as to think that the only good Indians are the dead Indians, but I believe nine out of every 10 are and I shouldn’t like to inquire too closely into the case of the tenth.”

Fearful that accepted violence against Native Americans would cause them to vanish, wealthy merchant Rodman Wanamaker created the National American Indian Memorial Association to raise money to build the North American Indian Monument in honor of our nation's indigenous people. In 1913 President Taft was joined by 30 Indian Chiefs and NAIM board members, J.P. Morgan among others, to break ground for the monument at Fort Wadsworth, Staten Island. Unfortunately, support for the North American Indian was fleeting so the monument was never built. [read more]

In February 2013, Red Storm Drum & Dance Troupe with the support of Senator Andrew Lanza, asked the National Park Service to honor the 1911 Act of Congress which gave land at Fort Wadsworth, Staten Island, to the National American Indian Memorial Association to erect a monument dedicated to America's indigenous people. Staten Island artist, Gregory Perillo offered to design a new, smaller version of the monument and Red Storm Drum & Dance Troupe vowed to raise the funds to pay for it with donations from the public.

The National Park Service refused the request without explanation.

The Staten Island Downtown Alliance has joined with Red Storm Drum & Dance Troupe to raise the funds necessary to get the monument built and finally make good on the promise made to the American Indian over 100 years ago.

Your generous, tax deductible donation will help us achieve that goal. 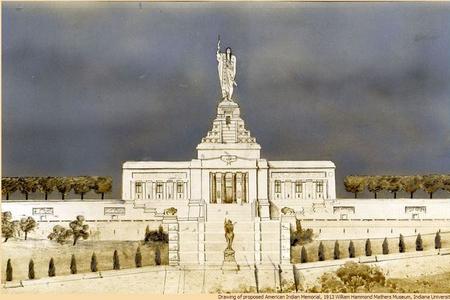